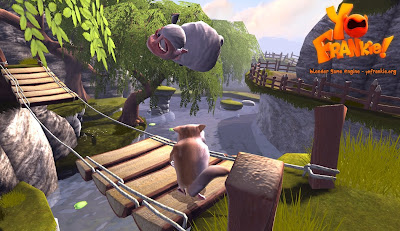 Thanks to the wonderful people behind PlayDeb, a very important Free game (free software and free content), is now available for Ubuntu 9.10. I say important because it's the Blender Institute's first Open Game Project made specifically to stimulate the development of Blender and provide beautiful example of what can be produced using only free software. It's based off of the film, Big Buck Bunny, the foundation's second Open Movie Project.

It's important not only as a beautiful Free game, but also just just as much so as a solid development model for Free content, proving that Free games, like the rest of the Free software world, can (and will) succeed! Blender's open movie and game projects are successful, even in a relatively small time frame and with their relatively small team, because they have proper art direction and a sound funding model. I hope we can see more projects materialize soon using similar methods.

Until now, people had to either build it themselves or download a .deb file from GetDeb which never worked, at least for me. Now, anybody running Karmic can install it through the PlayDeb repository!

Check it out here: http://www.playdeb.net/updates/Yo%20Frankie!

Take a look at what a Googler just sent me:


Grab 'em while they're hot! I have ten free Google Voice invites here for whoever wants them, and i still have three invitations leftover for my (as of yet, very slow) YouTube contest! I actually spent money on eBay just to share the love with you =]


I'm a longtime Google lover and am just as excited about Wave as everybody else; ever since the release of Gmail i've been wondering why Google doesn't do something exactly like this. That being said, i'd like to bring up ten short, sweet, and to-the-point concerns i've been wondering about that are worth some consideration. Please forgive me in advance if i'm speaking too soon; i'm still waiting for an invitation of my own.

Complexity
Wave is advanced, but will users be able to grasp it fully? Even email is confusing to some people. Google usually does an amazing job at designing user interfaces, but i wonder if Wave will feel heavy due simply to its complexity.

Overall Stability
Google Wave, the client, seems to still be buggy and slow according to many people. I'm sure they will work it all out, but if it's this hard for Google to implement their own protocol, that might be saying something about the future of it.

Desktop Application
When will someone create a desktop client? I hope they haven't made it too hard to do so.

Social Networking
Many people say it will be the Facebook/Twitter killer, but let's keep in mind that, just like email, Google Wave is a communication platform which makes it a very closed network. Is it possible for Wave to replace the functionality of social networking sites that require information such as groups to be much more publicly accessible? Perhaps it is possible through applications, which might be a better model anyways.

Instant Messaging
Wave is a much better communication method than email and IM because of both it's structure and instant character-by-character transmission, but how will that affect other networks like Jabber (XMPP) which is used for Google Talk? Will applications like Pidgin and Empathy be able to implement some sort of IM-only Wave protocol support, or will other networks be able to integrate well into Wave?

Multimedia Content
Text is wonderful, but much of our communication is shifting towards audio and video calls online, and although there are Google Wave applications that support it, it doesn't look like Wave itself will handle it in and special way.

Spam
Has it been considered? I'd like to know now that spam won't end up being worse on Wave than email. Although it is more difficult to spam wave currently, in the future those technical obstacles may have been overcome, and the problem could be worse than today.

Identification
Email today is used for ID on almost all websites. How are contact ID's managed? Google has been playing with tools like OpenID, OAuth, and WebFinger; will those be incorporated into Wave?

Data Portability
This is less of a concern for two reasons. One because Google's Data Liberation Front seems appropriately considerate of us being in control of our own information, and two because if the next and last concern is a problem, it might far overshadow this one.

Competition
Google Wave is much more advanced than email, and that complexity makes it harder to implement. This might drive power upwards, and be very anti-competitive. We could be limited to a few Wave providers, and we might all just have to use Google for the applications they have.

"It's a strange irony that today's Google Wave news was followed by a real Tsunami. I'm hoping Google never releases Armageddon."
--Some Twitterer

Still, email is out of date, and i hope that all of these concerns will soon enough be crossed off and Wave will successfully take over as the next generation of online communication. Are you ready to surf the web on waves? Sorry, i had to.

I'd like to ask the Ubuntu developer community to consider freeing up valuable CD space by removing Compiz and just using Mutter (Metacity 3) compositing in the default installation for Ubuntu 10.04 LTS, Lucid Lynx. From what i have read, the core of Metacity is a lot better than that of Compiz, but some work is needed first to avoid making the change a regression. While Metacity does still lack the huge amount of features available through Compiz plugins, only the few basic essential ones are needed anyways. Extra effects using Compiz can still be easily installed just like everyone did before it came prepackaged with Ubuntu. Once Metacity compositing does everything that Compiz does under the "Normal" Desktop Effects setting in Ubuntu's appearance preferences, then we'll have reached the feature parity we need.

Metacity provides a number of benefits over Compiz. It doesn't depend on accelerated graphics so users that don't have the necessary hardware and drivers for Compiz can still use it and enjoy the applications which require compositing, although it would be nice if Metacity was able to take advantage of accelerated graphics. This does make it ever so slightly more CPU intensive than necessary for users with decent 3D drivers, but it is less resource intensive as a whole, and for the majority of users, the memory consumption is what they notice when Compiz is enabled.

Unlike Compiz, Metacity is actually standards compliant, so it doesn't malfunction when using certain applications. A smooth and consistent desktop shouldn't have any of that. Compiz deviates from the Unix philiosophy and, as Dylan McCall posted to the Ubuntu developer discussion list, many of "Compiz's effects are entirely out of scope for a window manager and rely on horrible, kludgey, unsightly workarounds. All of Metacity's effects are in scope and only exist if they're going to work consistently. Everything else, for example fancy window previews on the window list applet, can and should be implemented by the individual child applications."

He adds that switching between Compiz and Metacity produces an inconsistent user interface which is pronounced by the fact that depending on your hardware setup, Ubuntu will fall back onto Metaicty if it can't enable Compiz:


...users get confused when they switch between Compiz and Metacity, because the two have profoundly different feels, and in some cases different key bindings. Metacity uses workspaces, while default Compiz uses viewports (and a different number, if I remember right). One follows the extended window manager hints spec to precision, another has quirks.


Because of that, switching the window manager should not be considered standard operation. I definitely don't think it is acceptable to dump it as a prominently displayed option as if it is something user friendly to do.


Dylan brings the future of Gnome into consideration as well:


One obvious next step in GNOME's evolution as a desktop environment is the more rigid integration of the window manager with everything else. For example, GNOME-Shell is based on a heavily modified Metacity. In the future a lot of cool stuff will depend on Metacity (or whatever it comes to be called later on). It would be a shame to miss it.


Overall, Metacity is actually prettier, gives the desktop a smoother feel, provides better consistency, and takes up less system resources making Ubuntu feel faster, but some work is still needed before Compiz could be dropped. Can we commit to making this a long-term goal and put it on the roadmap?


The first Ubuntu Gaming Team meeting was a huge success! With over two hours of discussion going strong, we covered a lot of ground. One of the major topics for out next meeting, and our most ambitious project, is coordinating the creation of a distributed content development platform. For this, we will need lots of input from FOSS game artists and free content producers like the Blender Open Movie Project.

Lack of good content is the #1 impediment for FOSS games. Most developers are not artists and the challenge of content creation is much more difficult than code. The need for FOSS content is the same for code, but current platforms that exist for code do not offer features needed for content. Code is all text and much easier to handle, while content is difficult as you cannot “diff” a picture or a blender file. On top of that, while distributed code development has been refined since computers were invented, content is a much newer ground, especially to apply FOSS distributed development to, and it simply hasn't received any of the focus and effort that code has.

We need input to help agree on a base for the platform and what features are most needed. Additionally, we might like to look to Canonical and/or the Blender Institute for support as they will benefit most from and be willing to contribute to such a project.

I just got back from the Boston sub-reddit meetup, and it was incredible! I expected us to have a table with maybe 20 redditors tops, but we had an entire room reserved for us and upwards of 40 people showed up! Great success and thanks to everyone who came-- we must organize another one of these in the future.

Anyways, while i was there, a couple guys recognized my handle, and called me out on spamming their, and related, sub-Reddits with my blog posts. Not in a horribly confrontational way at all-- it was very entertaining actually-- but i made this promise to them on my way out, and it extends to all of you as well: i will not be submitting any more links to posts from this blog on Reddit. I'd gotten a little carried away with submitting many of my posts at once across multiple related subreddits, so i'm sorry about that! From now on, i'll only be depending on you guys my agents to submit my posts for me.