Looks like FOSS gaming needs more than just promotion and financial support. After my last post about it, i recieved a very insightful email from Tim Blokdijk since my comment form was broken, and i thought it would be worth sharing with all of you. Seems the biggest barrier to FOSS gaming development isn't code, but content.

I can't comment on your blog but I still feel a need to respond to your “Linux needs games, games need you” posting.

Up to about a year ago I was quite involved with the spring project, springrts.com one of the more successful open source “games” out there.

To me the nr 1. challenge/problem is that “we” the open source people more or less cracked the problem of distributed code development. It's all text based and a lot of focus and effort has been put into that “way” of working. But it's different for content, as you cannot “diff” a picture or a blender file. Distributed content development is a pain in the ass. Spring has loads of content but it's very difficult to get a distributed team to work on integrating all this into one style that can compete with commercial games.

There is progress, the creative commons licenses makes it easier to do things as the GPL and other traditional licenses are to much focused on code. Broadband internet makes it easier to send around large binary source files. The 3D drivers for Linux are improving.. Gimp actually starts to get useful so artists are more open to the idea to look beyond Photoshop for a second. Wings3D is stable enough and useful enough to get people modelling. And Ton is finally committing himself to a gui rewrite for Blender. All these things used to be big blockers but it's still not practical to start a distributed content development project.

The only real successful open source content projects are “Elephants Dream”, “Big Bug Bunny” and “Yo Franky!”. But that involved getting 10+ people together for 6 months to work on a project. And even then they had problems managing the content files. They were using svn but had to use a small webapp to keep track who was editing what files.

A service like launchpad would need “a lot” of work to make it practical to develop content in the same way as it's possible to develop code. Your constantly running into/pushing the envelope. Dpkg repository's are not designed to cope with "source" files of many gigabytes. Executable files that need to be binary identical (or very close to) to allow people to play multiplayer games (across win/lin/mac platforms). And there are more issues like preventing cheating.. and stuff.

I personally think that you really need a company as canonical purely dedicated to game and content development to get to a level where you can speak of “reaching a tipping point”. The Blender institute is a contender but they lack a large amount of hard cash to accelerate the field.

So there you have it. Can the Blender Institute take on the challenge? Will Canonical step up to the plate?

I'm not sure how long this has been broken, but i got a couple of emails from people who tried to comment but couldn't. It's a little upsetting that all this time i've been calling for comments but people were unable to leave them so now i've lost a lot of potential comments (if two people were motivated enough to go out of their way to email me, i'm sure many more would have commented). It's fixed now, so sombody hurry up and post "first!"

FriendFeed, the coolest app no one uses, should be the new Twitter, but i still have one problem with it: it's closed-source. Identi.ca is open source, so i'm using that until FriendFeed releases their code. I posted to their feeback room proposing they adopt APGL (respond if you're in support!) and someone had the idea that as a for-profit, private company, they would never free their source code. I don't see why keeping their code proprietary protects their profits at all since they don't make money by selling it and Reddit is a great example of open sourcing success. So, why don't they?

Wikipedia has a growing list of the many upcoming and production electric cars, scooters, as well as motorcycles (even open source projects), but what about the millions of gas vehicles already on the road? There doesn't seem to be any single good central source of information for electric car conversions.

It's hard to do conversions due to the unique form of different vehicles, but the waste generated by abandoned vehicles is huge, not to mention buying a new car is a big investment. What auto shops are willing to do conversions, and how much do they (over)charge? Is DIY the way to go, and where can you get everything you need? Most importantly, is it even worth it to convert your car or is it cheaper to just buy a new one? Seems this is a niche waiting to be tapped.

It's no surprise that gaming is one of the areas lagging most in the Free Software world. Fanatics will say that yes there are good FOSS games, but the truth is, they're nothing compared to the plethora of proprietary options for Windows. The current open source games won't hold over people who crave the latest games that are being cranked out. Free Software emerges and evolves out of necessity and innovation. It's hard to see a real need for gaming, but better games could offer a lot for the spread of GNU/Linux adoption.
Games are already cited as being the only factor holding many many people back from switching over from Windows completely. Think about it-- if FOSS gaming reached the "tipping point" and games were compareable to the newest proprietary titles, the fact that users could have similar games for free would be a huge selling point for Linux.
The world of gamers is HUGE. There are individual players, groups of friends, competitions, and professional gaming leagues. Gamers play on whatever platform has their games. This can be exploited for Linux. Right now, tournaments can be held for games like Nexuiz (donate!), and in the future when games are attractive enough to adopt Linux for the games, the world of gamers will start to migrate. Until then, they won't even budge. We can't hope to even chip at them until Linux gaming improves.
What can you do? Contribute! Linux needs games, and games need you. Of course, it's a good idea to support and FOSS products you use, but games are in serious need of support. If you're a programmer, you can obviously help with that. For the average anybody, you can download and try the game, submit bug reports, or at least send in a donation. Even if it's just $5, it makes difference.
Here's my request to you: Donate $25 to FOSS gaming. You could donate all $25 to one game, or $5 to five different games, or whatever you like. Just google a list of top FOSS games to try. It's easy, and gaming needs a boost...and Linux needs gaming. So spread this far and wide and give Linux the games it so desperately wants and needs!
Update 2009.04.16: I recieved a very insightful email response you can read here.

This isn't a problem specific to Google, but it just happened to bother me while waiting on these two help requests which to this day have still not been solved and Google is a company i would've expected to have come up with some brilliant solution to this issue.

Most issues are from users who don't know what they're doing, but for issues that are on the company's end, it's almost impossible to get them fixed. Facebook deals with this in a great way...they make it impossible to find a way to contact them. There needs to be some way to sort out the issues that are no on the user's end and then prioritize them. Anybody have some brilliant ideas? Post them in the comments!

The announcement of Google Transit three an a half years ago was exciting news to me. Finally, the best map service would also be able to provide directions for public transportation! Since that announcement, i have watched the number of enlisted transit agencies grow and grow, but to this day the Massachusetts Bay Transportation Authority (MBTA), who provide public transportation through the Greater Boston area, has still not enlisted in Google Transit. They even adopted Google Maps to provide directions on their own website, but they won't use Google Transit. 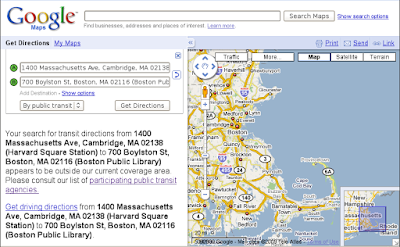 This is extremely inconvenient, to say the least. Why is it that they have failed to acknowledge or respond to inquiries regarding this? I contacted them when Google Transit first came out and again more recently, but neither attempt got a response. My only theory is that they want people to be forced to use their website for directions. This is one failure of a marketing strategy if that is indeed their (backwards) thinking.

Making information more accessible will only help the MBTA, and most of all, customers of the MBTA. Every search for directions using Google will provide a link to the MBTA website, and webstites who need to link to public transportation directions will give even more visibility to this. Everybody wins. Restricting access to this information doesn't do anybody any good. A small uprising of angry commuters have even created a Facebook Group titled, "Put the MBTA on Google Transit!!!" which i engourage all of you reading this to join. Supposedly, this issue will even be gaining some media attention soon, so hopefully well see some progress in the near future.