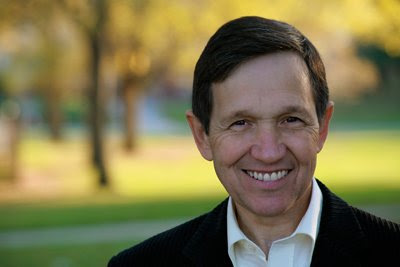 While Rep. Dennis Kucinich (D-OH) is widely ignored by mainstream television media, his ideas are much more in line with what the American people want. It's unfortunate that other Democrats poke fun at his height and appearance. You won't stop hearing about him over the Internet, a much more open place for politics. So why isn't Dennis Kucinich a front-runner? After all, he seems to be the truest Democrat. He brought a Cheney impeachment resolution to the House floor and plans on Bush next. Even as the mainstream media tried to spin impeachment, he was unflappable. You can even see ALL (none were edited out) of Dennis' responses at the 11/15/07 democratic debate. Don't stop here though, keep learning more for yourself.

Check out Kucinich on the Political Compass 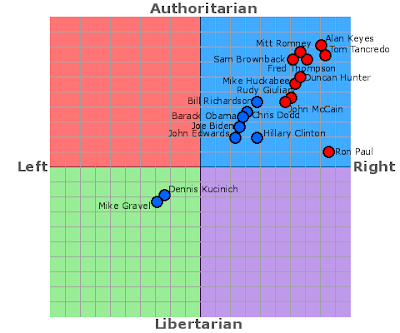 Well, most people already know not to trust FOX News. Just look at how much media their parent, News Corporation controls; too much. I just happened to stumble across one video and decided i'd gather a few more to share with you. Keep in mind, these are just a few that i found within a few minutes.

This here is the most ridiculous thing i have ever seen!


External link.
Available from the creator of that video is a playlist of FOX News Bias.

So now what do you think of FOX News?

Since it's conception, the internet has grown and evolved to become a network that unites peope all over the world using all kinds of devices: personal computers, gaming consoles, mobile phones, and all sorts of cool new gadgets. The Internet's enormous potential to continue to revolutionize the world we live in has not dimmed one bit. There is still lots of room for growth, expansion, improvement, and innovative new uses. There are infinite possibilities for the internet. Imagine not having to only hear about political candidates with the most money to canpaign but hear more from the candidates who's ideas gained the most support on a level playing field. This kind of idea becomes a real possibility with the internet.

Wikinomics is a book i'm yet to read but, from what i can see, contains some valuable ideas. It's supposedly based on the ideas of Openness, Peering, Sharing, and Acting Globally. The book dives into this idea of "Mass Collaboration" just like Wikipedia uses.

So the internet is a great place to learn, share information, ideas, and spawn great creativity. I like this video:

Anybody can make a video and post it online:

And nobody is restricted to one website to do this. Ah, i can't even begin to explain all of the wonders of the internet. I'm sure anyone reading this blog can grasp some of it's greatness.

Dell made a surprising move when creating IdeaStorm, a place where people are invited to come and post ideas and vote on them. It was really a joy to hear that they had done this. It resulted in some big changes. When Dell announced that they would sell computers with Ubuntu pre-installed, they made pretty big news.

Wouldn't it be great if this could be taken to the government? Well, Massachusetts Governor, Deval Patrick, has a MyIssue site where you can post issues and add your support to existing issues like the use of Free software exclusively for Massachusetts. This could use some development but we're heading in the right direction! What if this could make it up all the way to the federal government? What if there was an online directory of all public governemnt files? What if all laws, proposed and in practice, were published to the Internet along with an analysis of what they mean and what they do? We could sniff out bad laws, and clean up our government, even reform our tax system effectively!

Then there's the Open Library project which provides free online access to public domain books. I imagine an open library, beyond this, of all books. A place where you can read the books, search through them, and even help translate the books. Think of a huge web of books. You're reading page 56 of a book written in old english and right alongside that page is a line-by-line or paragraph-by-paragraph reiteration of the reading in easy-to-understand, current-day language. Not only that, but chapter summaries and analyses are available. Even more, as you're reading, you can see where the text refers to previous parts of the book, turn off spoiler protection and see where it relates to a future piece of the book, and even how it links to other books and outside documents. Who would ever settle for SparkNotes with a resource like that?

And still, more and more becomes available constantly and we have no idea where the web will take us in the next 5 or even 2 years! That's why it's also so important to protect our digital freedoms.

Still, the internet began as an experiment, and continued to develop by modifying what already existed. Now this next idea of redesigning the internet is kind of hard to explain this but i like how the Economist put it: if we were to design a new planet-wide network on Mars like the internet on Earth, how would we do it? Knowing what we know now about the problems the internet has, how would we build a new one? There are people working on designing a new internet, but reconstrusting a global network of computers isn't going to be easy...or cheap. But the need for this new internet will continue to grow just as the internet continues to grow. Even the founders of the internet have come out to say that the internet is outdated. I ask though, instead of rebuilding the internet, why not just create a new network (making sure that anyone who wishes to connect to it must abide by laws to protect privacy, digital rights, and internet freedoms) and make it something people would want to connect to, and slowly phase out the old internet?

Here's a beautiful way to rip off Microsoft. I haven't actually tried this since i prefer to run only operating systems that don't suck but i have heard from a friend that he has tried this and it works.

All you need to do to acquire a valid CD key is go to any major computer retail store and copy down the stickers on the computers with the CD keys printed right on them. I did this at a BestBuy just to see if i could get away with it and i walked out with two Windows Vista Ultimate Edition codes that i never ended up using. I wasn't at all sneaky either-- i lifted up a laptop and bent down to read the sticker all while employees and customers were there. I turned a desktop computer and practically crawled under a table to see the sticker behind the computer. Nobody said anything to me.

How can this possibly work, you ask? Well, apparently Microsoft has decided to allow as many re-installations as you would like with Windows Vista. So all you have to do is browse around for the computer running the Windows Vista edition you want and steal the code.

According to my friend, all he had to do was download and install the beta version of Windows Vista and use the code he acquired to activate it. He also said that he had to call Microsoft and tell them that he was re-installing Windows. They asked him a few questions and he was all set. Since the Windows Vista Beta's have since expired, you may have to use a more roundabout way to get a copy of Windows Vista to use a stolen CD key on.

If anybody decides to try this let me know how it works out. I don't know why you wouldn't just go ahead and get Ubuntu instead though. 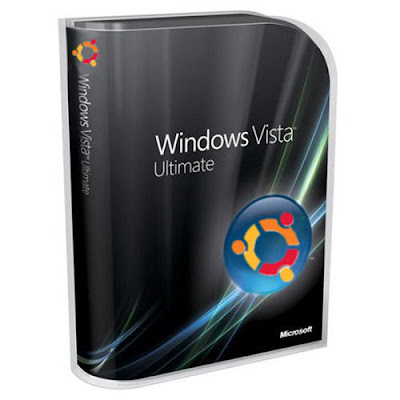 I'm sure that many of you have heard about "Net Neutrality." For those of you who haven't already gotten involved, the internet as we know it is being threatened by big cable and telephone companies who want to be internet "gatekeepers." There's a lot at stake here. Most recently, the US Department of Justice opposes Network Neutrality! This is gravely frightening. Please, read through this post for great information and resources, get involved, and spread the word!

Google has a Network Neutrality page where you can learn more and stay current with updates on net neutrality.

Save the Internet has a lot of information and a page where you can take action.
They also created this video:

You can send a message to the FCC through Common Cause.

Network Neutrality is essential for independent media. That's news, and all sorts of content including video and music. Check out Rock the Net, musicians for network neutrality, from the Future of Music Coalition to learn more and take action.

Here is a video from Rocketboom talking about the net neutrality crisis:

This is a nice short video explaining Network Neutrality from Public Knowledge:

A Bill Moyers documentary called "The Net @ Risk" aired on PBS and you can watch it online.

Here's even a humorous explanation of Net Neutrality from John Hodgman on The Daily Show with Jon Stewart:

So ACT NOW, or say hello to the Internet of Tomorrow:

So get involved-- tell your friends, take action, spread the word, SAVE THE INTERNET!

Okay this is the third post about getting a new laptop. After searching the Wonderful World of Wikipedia, i found this computer from R Cubed which seemed like a much better deal but after some discussion on the Ubuntu forums, i discovered that it was the same computer as the one i posted previously from ZaReason. 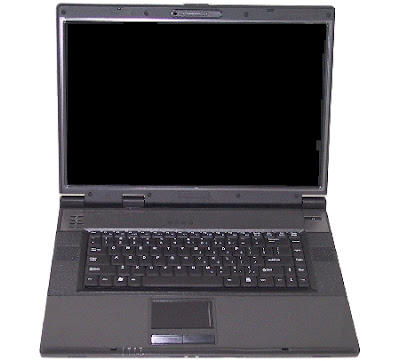 This picture is what the laptop actually looks like-- the other picture i took from ZaReason turns out to be the wrong one (their fault), not to mention the crappy photoshop job they did with the desktop cube.

I think i'll still be going with the laptop from ZaReason for the better graphics card and cheaper upgrades. The problem is that my parents said that they'd buy it for me, but i won't be able to buy another computer for a very, very, very long time. We just ran into a financial problem so i don't want to get the computer before i can get a source of income to pay it off. Anybody know how i could make some fast money?