I've already brought up the idea of FriendFeed going open source in a blog post and on the FriendFeed Feedback room, but something a little more basic, OpenID would be a nice addition that can be done sooner than open-sourcing. Like and comment on FriendFeed if you support this! I also proposed the idea for Reddit which recieved as much opposition as support (for some reason people thought i meant that Reddit should require OpenID), but check it out there too.

I posted earlier on the fundamental problem with customer support and i've been having some serious problems with Facebook recently. Although in the comments, all i've recieved so far is people having similar issues, i've thought of a few solutions on my own.

Firstly, companies like Google and Facebook could have (paid?) "super users". Now, i know that sounds like a bad thing. Everybody always hates the super users, but the only power these ones have is to be able to report bugs directly to the company. For example, i am a heavy user of Facebook and Google services, so i'm more likely to know how to use them, how they work, and when a problem is on their end. Their systems could detect that i'm a very heavy user, and they could look at my activity online (only things that are public, not go through my account activity), and invite me to become a super-user. This would put me in contact with the company over any problems that should be reported, and they could contact me to test to make sure something works.

Second, customer support could function more like a bug tracker. This way, every question submitted could be open for answers from other users (which is already the case), new posts would detect old duplicates (which should also already be the case), and real bugs could be reported as such. This could easily be combined with my first idea, and super-users could be the one with the privileges to confirm a bug as being on Google's end instead of a user error.

What do you all think? Do you have any better ideas? Post in the comments!

If it hasn't happened to you, you've heard the stories. Facebook can suspend or disable your account at any time with or without warning and/or explanation. Although there are some legitimate reasons and spammers who should be banned, most of the time honest users are victim. 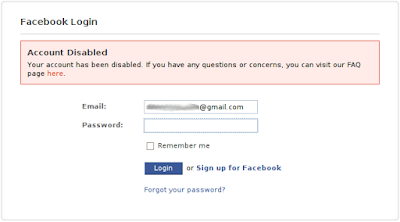 There are a number of problems here:

1. No account should be suspended or disabled without a specific reason. Facebook cannot simply say that your account has been flagged because of a violation of our Terms of Service (TOS), in which case the user must look through a list of things they may have done, and, if they can't find the reason, are helpless.

2. A warning should be sent out before the account is suspended or disabled. A warning with adequate response time must be sent out and must include the specific violation of Facebooks TOS.

3. Facebook needs real customer support. Have you ever noticed how hard it is to contact Facebook about anything? All contact forms and email addresses are hidden away and there is no number to call.

We've entrusted Facebook with a lot of our information. Our groups, our schedules, our friends, messages, pictures, videos, etc, etc, etc. They can't have the power to remove us and erase all of our stuff for no reason!

To whoever fucked my bike tires yesterday (Monday, May 4th), i will give you $20 and a low-end laptop to come forward and claim responsibility (publicly or privately), and i will take no action against you (and make sure nobody else does on my behalf).
To everyone else, please help me by sharing this so that hopefully whoever did it will see this and contact me.
I don't know if i was targeted or not. I locked my bike against the railing in front of the school, and when i came back, both my tires were popped. Since i don't drive, biking is my main mean of transporation. Needless to say, i was a little miffed.
Thanks everyone.

In recognition of the value of FOSS gaming, the Ubuntu Gaming Team has been formed of mutual benefit to Ubuntu and FOSS gaming. As of today, the team is now open for anyone to join and participate in. Working towards improving FOSS games and developing its community will turn a significant barrier against Ubuntu adoption into an appealing reason to switch.

The Ubuntu Gaming Team will work to address the obstacles hindering growth in FOSS gaming such as the need for effective distributed content management or significant investment in free content development in order to promote FOSS gaming through Ubuntu and Ubuntu through FOSS gaming. New ideas are encouraged and appreciated.

FOSS gaming is important to Ubuntu as a lack of quality games is one of the most cited reasons preventing users from switching from Windows. Gamers, who currently feed off of the proprietary software model, represent a large and valuable user base. They will not even begin to gradually migrate to Ubuntu until their needs are met. They are very capable of understanding the ideological and technical benefits of using a free operating system like Ubuntu, and are often interested in switching, but higher value is placed on high quality gaming and the entire demographic will not budge until the pragmatic advantages of open source actualize through FOSS gaming.

The team is dedicated to FOSS gaming, and will not push for commercial games  on Linux as significant effort is already put into the development of Wine and pressuring video game publishers to port their work to Linux. Once FOSS gaming reaches its "tipping point", code and content will be easily reused to foster the development of new games and innovative ideas in gaming. The Ubuntu Gaming Team fills a great need for an organized effort to support FOSS gaming.

As (hopefully most of you haven't) may have noticed, i had a little trouble with Planet Ubuntu a few days ago. First, while trying to upload my hackergotchi (my avatar/icon thingy), i accidentally uploaded the HUGE version so anybody who visited the planet during the approximately fifteen minutes before it updated again was greeted by a giant image of my face filling up more than the entire width of the page. Frightening, i know. On top of that, some trouble with my feed causes any updates to posts, even just alering labels, causes the post time to change, resulting in 17 of my posts reappearing on the planet consecutively. I've figured out that this is because even though the time of post on Blogger does not change, Feedburener updates it. This is really inconvenient as i'd like to be able to add/remove some of the labels on my posts, so if you can help, please reply to my thread on the help forum or in the comments of this post! Thanks

Update: I've had complaints of this because of edits to my recent post-install guide and still haven't found a solution.

They are clockwork.
They can never be like us.
We think. We learn. We feel.
They compute.

A machine knows nothing
of love,
of friendship,
of loss.

They are not self-aware.
They have no will,
no sense of purpose,
no hopes or desires.

Always limited by their programming,
They can never be conscious;
They cannot imagine;
They do not dream.

A machine cannot compose a song,
dance,
write a poem,
or paint a masterpiece.

We are human, yet
What are we
but clockwork,
but machines?