So i decided it was time to take a step up from blogspot, and i registered a domain for myself to use. Although my blogging platform is still Blogger, the blog is now at blog.thesilentnumber.me

I'm also now using a new FeedBurner feed so my FeedCount is reset to zero and those ~100 people that are subscribed to the old one should update their readers!

So, i've been using a sort of messed up install of Ubuntu because i was testing the Jaunty alpha way back when, and never did a clean install once the final version came out. I get some weird bugs every once in a while, but they're minor so i tolerate them (although i will be sure to do a clean install for every new release from now on). I'm never sure if a bug i encounter is an actual bug, or just a side effect of upgrading from an alpha. One of these strange bugs is that, very rarely, when i'm browsing in Midori, although it did happen once in Firefox, a black bar, a few lines of text thick and the width of a web page, will appear. It goes away when i scroll so that the bar is out of view and then scroll back, or if i minimize and restore the window. Anyways, one time, something a little stranger happened... 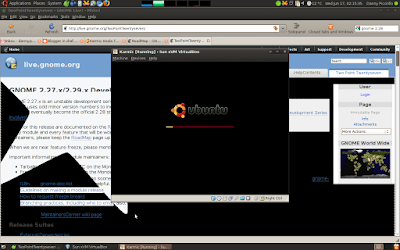 That's clearly the cutout of a giant star. The black bar was a box covering the entire page except for this huge star. What the hell is that doing there? That screenshot isn't perfect since i clicked something before capturing it which made some blocks go back to normal, but the huge star is still clearly visible. Is this something other webkit-gtk users have experienced and how the hell could that star have gotten there? 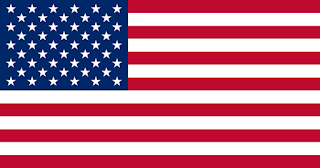 Happy 4th of July, America. When was the last time that actually meant anything real?

Forgive me if i feel strongly about this, but it seems us Americans are only good at complaining, blaming others, and consuming. I am aware that many of us are patriotic Americans who take pride in their country, but how many of us actually do our part to make it better? We all consume irresponsibly, complain about the state of things, and blame "them" for all of our problems. Democrats and Republicans blame each other, but i'm an Independent, and although my views are very Left (Liberal) Libertarian, i put the blame on all of us, the citizens. Our apathy and inaction is what maintains the status quo. We as a nation have the potential to be so much greater than we are, and no single issue is as sad as the total of all that wasted potential. It seems we won't rise to action until things are bad enough that we can't tolerate it anymore. I, for one, refuse to conform to this mentality.

I will do everything in my power to make a difference because as Bill Clinton stated so eloquently at the funeral of Coretta Scott King, "the difficulty of success does not relieve one of the obligation to try". Those words have ever since resonated with me, and regardless of how you feel about Clinton, i hope they will do the same for you. People always argue that nobody cares, but this hyperbole needs to disappear. If everyone has the mindset that they can't influence change, then true change will never come. If most people are not going to take action, does that mean that nobody should? No, because the right thing to do is not what most people actually do, but what everyone should do. "Nobody cares" is a shameful denial of all the grassroots progress that has been made. "Nobody cares" is a pathetic excuse to shirk one's collective social responsibilities. "Nobody cares" is a weak will that ignores the efforts of all those who do care. We all have an obligation to do something, so for those of us who are already active, we should encourage others to care as well.

I propose that we don't just use July 4th as a day to spend time with family, grill some barbecue, and watch fireworks come nightfall, but that we give the day some true justice and do something meaningful with it. The Fourth of July should be a day on which we not only celebrate our independence, but also exercise it: embrace the principles that this country was founded on by putting our freedom of speech into action. This should be a day where we give back to our country, care about it, and help shape it. Democracy is participatory; it depends on us.

Today, as we're celebrating, let's reflect on the rights we take for granted, the ones that give us reason to celebrate the founding of our country. Think hard on your responsibility to be a part of this country that is your home. The greatness of this nation is in its limitless potential. When the next Independence Day comes around, let's act to protect and fulfill the purpose of those rights. We can gather together in every major city to rally for the causes we care most about, no matter what they are or what side we take, and grow stronger together. Join your favorite organization(s) in holding up signs, handing out informational materials, and simply discussing your views and ideas with others. Or create your own materials and head out on your own or with friends. By sharing knowledge and opinions, even conflicting views, we can reverse the dividing polarization that has separated and pulled us apart and we will reunite our states. Doesn't Independence Day deserve something like this?

I know this idea may sound crazy, even hopeless, but I know that it can make a difference-- that it should make a difference. We need this, an annual day of action to reaffirm our independence, to bring us together around all of our disagreements, to take control of our own country. What better day than the anniversary of our Declaration of Independence? Imagine it: the entire country coming together not just to celebrate its past, but also to improve its future; thousands of people in the streets connecting with others and sharing information on the causes that matter to them; activism on a scale we've never seen before; real change in the hands of the people; us taking genuine ownership of our own country. This is the perfect way to commemorate this day and honor the value behind it. Plus, we can still enjoy the fireworks come nightfall. Consider this a call to arms. Let's transform our Independence Day, together! Who's with me?

If you support the idea, please repost it somewhere else and start organizing! Post to (micro)blogs, forums, YouTube, flyers on the streets, or anywhere else. Contact any organizations or groups you care about and get them involved. So far, all i have is the Facebook event from which the idea originated. We should get this to go viral or something. If you have any ideas or suggestions on making this a more successful effort, please post in the comments.

Hey everyone, I'm having a YouTube contest to give away an NVIDIA e-GeForce 8800 GT graphics card that i bought for $180 last year, for free! The contest is for the best informative, promotional, or awareness video for anything i like or might be interested in. So, you can pretty much do anything you want but some good topics include: Free Culture, Polyamory, Lojban, Atheism, Ubuntu, Anarchism, Creative Commons, Free Software and Open Source, etc, etc.

I'd like to get new people involved with the YouTube community so if this ends up being your first upload then bonus points to you! Also, uploading to The Internet Archive and The Video Bay (if it's functional yet) is a plus but completely optional. The only rules are:


Don't worry about camera quality, being super-creative, or having fancy special video effects because those things are nice but you really don't need them to make a good video. I'll be judging based more on the content of the video than any of those things so really use whatever you have whether it's a digital camera, crappy old webcam, or camera phone. I'm aiming for 50 video responses so you'll have a one in fifty chance of winning! The deadline will be August 3rd or until i get 50 responses, whichever one comes later. So, that's it. Start making videos! Good luck, and I look forward to seeing them!

Looks like GMail Voice and Video Chat will soon be available to all of us Linux users out there! From the end of this update on version 1.0.10 of the software:

Lastly, thanks to everyone who has written in asking about support for Linux. We've had to rewrite a key piece of technology, so this has taken some time. However, the results will be worth the wait.

Of course, you could just use a real IM client like Empathy to get audio and video chatting over GTalk and Jabber now.

Ever since word got out a couple of years ago that the pioneers of the anti imaginary property movement, The Pirate Bay, were working on a YouTube competitor, i've been quite excited! I love Google and YouTube, but they need some competitors to revolutionize online video similar to GMail and web-based email. First, Dailymotion created an open video website and transcoded all of their users' videos into Ogg Theora/Vorbis to use with the HTML 5 <video> tag, and now The Video Bay is launching which will join Dailymotion in using HTML 5 and Ogg.

I'm excited to see what new cards they bring to the table on top of keeping with the spirit of The Pirate Bay to protect users' privacy and ignore copyright and pretty much all other "intellectual property"-- maybe even new hope for P2P streaming media (internet radio & TV)! This should at least put pressure on Google/YouTube to withdraw their previous comments on using Ogg Theora/Vorbis and expand their HTML 5 demo using it. Heck, maybe they'll actually start making real improvements to YouTube. I'm actually considering switching my channel over already, but we'll have to see what The Video Bay looks like when it fully launches.

Since first announcing the Ubuntu Gaming Team (wiki, LP), there has been a lot of interest as well as backlash from the community. Many concerns arose out of surprise and confusion. Namely, there were fears that we were trying to replace the Debian Games Team when, in fact, we state on our team pages that we are a marketing and advocacy effort that does not engage in packaging, development, or programming with links to both the aformentioned Debian team as well as Freedesktop Games.
We've recieved a number of ideas to get us started and are happy to announce our first meeting which will take place on July 26th at 19:00 UTC in #ubuntu-gaming (irc.freenode.net). I encourage anyone interested to attend. The agenda includes the following:

Please feel free to contribute to the agenda located on the meeting minutes page. Meeting notes and the IRC log will be made available on the same page.