You all told me to fight the good fight so please, contact Facebook! No more accounts disabled because of mass flagging or automatic deletions! Facebook must send out a proper warning, state why the account will be and/or has been disabled, and give users a chance to get them back. This isn't just an issue with Facebook, but they're among the worst offenders. We must not tolerate it! It's our  information that we entrust them with, and they must be held responsible. 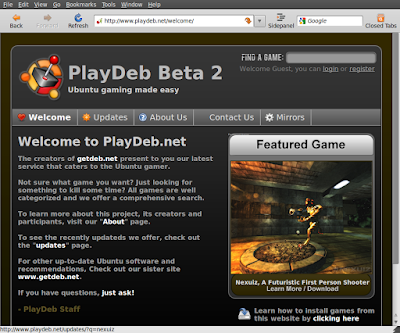 I mentioned PlayDeb, from the GetDeb guys, as being something to be really excited about with the upcoming release of Ubuntu 9.10 Karmic Koala. I just checked out the site and their new beta is finally up and running! They currently are only serving Jaunty (which is fine since Karmic is only in alpha) but Karmic support is sure to come.

The new site was designed by the Nexuiz Nijnaz, players of the great cross-platform FLOSS game, Nexuiz. I am a bit disappointed seeing copyright retained on the site instead of using a free culture friendly license like the Creative Commons Attribution-Share Alike license, but it looks like this is just what both the Nexuiz and GetDeb guys do on all their websites and i certainly won't make a big deal about that. The website is wonderful, and they've done a great job. The "Updates" page lists all the available games and allows you to filter them by genre, and install them by simply clicking on an apt:// link.

Each game has a description and screenshot, and many even have videos attached! You can register to rate and comment on games, and if you like PlayDeb, i encourage you to use the donate button on their "About Us" page.

In related news: The Ubuntu Gaming Team just had our first meeting which was very successful and i'll be posting all the details soon! 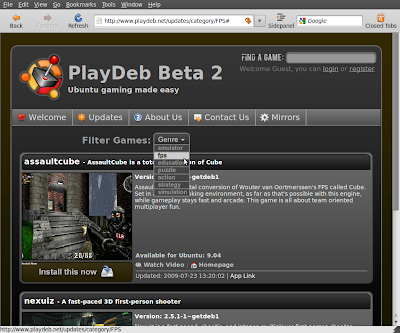 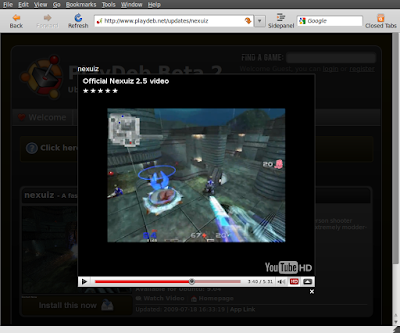 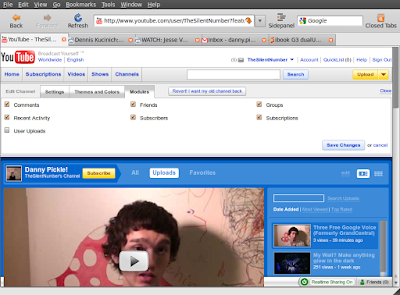 YouTube has had groups for a while, but they're pretty much closed off from the rest of the site and completely useless. There isn't even a way to search through them! Their new channel design layout has two modules that i've noticed: one called "Groups", and the other called "User uploads". When i select one of them, the other one is automatically removed, and neither one seems to actually add or remove anything from my channel page. I'm not sure why they can't both be enabled at the same time since "Groups" and "User uploads" hardly sound like they would be conflicting, but this does suggest that YouTube is actually working on becoming even more social and making groups useful. Does anybody actually have either of these enabled and showing up on their channel pages?

Adding onto my YouTube contest, i have three Google Voice (formerly GrandCentral) invitations to give away! One will go to the winner of the contest along with the NVIDIA 8800 GT video card and the other two will go to the first contest entrees that ask.

In an interesting discussion that took place recently on the Ubuntu Developer Discussion list about the scalability of communication channels for Ubuntu, this anecdote came up which i thought was worth sharing. First, part of an email from Andrew Sayers, citing two articles by Joel Spolsky, discussed a more effective way of dealing with issues that come up.


This suggests a solution I've pulled together from a couple of Joel on Software articles: when someone comes to you with a problem, first fix the presenting problem, then fix the second-order problem that caused it, then the third-order problem, and so on back to the original source.  Although this significantly increases the amount of work per issue, it's more than offset by the reduction in the number of issues.

Of course, this is a better way to approach all of the problems in the world today, although perhaps starting with the source might be more appropriate in many circumstances. As in Dr. Horrible's Sing Along Blog (i couldn't resist), when Billy tells Penny in response to her requesting signatures for a homeless shelter, "You're treating a symptom". Onno Benschop posted this response about his experience applying this revolutionary philosophy to managing a help desk for 5,000 seats.


This approach speaks to me in many ways. As the manager of an IT help-desk for 5000 seats in the mid-90's I instigated a regimen where user problems were fixed by users. The way that worked is that the IT professionals were discouraged to just "click and fix" a problem, they had to explain to the user what caused the issue, how they got themselves into the problem, and how to dig themselves out.

This met with lots of opposition.

It has been said that I'm a stubborn person and I persisted. After 3 months, something really interesting started happening. The number of calls to the help-desk started declining. Initially management thought it was because users were so fed up waiting that they stopped calling us. Further investigation indicated that users were having less problems. They were more confident, more knowledgeable and more able to help themselves.

Yes, that's it. This shouldn't be incredibly revelatory or anything, but i hope that this kind of practice spreads. Fixing issues at a more fundamental level and creating competent users/customers just tickles me. Seriously, why can't people stop being so lazy and do things right? It pays off dammit!

As some of you may have noticed, i tend to leave my i's lowercase instead of using proper capitalization. This is not, as some of you may have assumed, because i never learned to capitalize my i's, but it is actually a habit i had to work to develop. Yes, i used to diligently capitalize my i's, so when i decided to start being rebellious against the English language it was actually hard for me to remember to not capitalize my i's. Now, it's grown on me entirely. To me, it feels and looks more natural, but let me explain why i started doing this.

I simply questioned why we capitalize our i's, and not our you's (yes, as in the word "you", not the letter). Originally, i's were just capitalized for practical reasons, none of which make any sense anymore, and now, there is no logical reason, grammatical or otherwise, for doing so. Of course, English is riddled with irregularities as all natural languages are, so why did i choose to ignore this particular rule?

In addition to the above, English is the only language that does this, and i have to wonder if it may have an effect on the English-speaking world. I sympathize with journalist Sydney J. Harris' sentiment that "It's odd, and a little unsettling, to reflect upon the fact that English is the only major language in which "I" is capitalized; in many other languages "You" is capitalized and the "i" is lower case". It seems a bit self-righteous, doesn't it? Leaving myself lowercase and capitalizing You has been humbling.

For these reasons, i choose to no longer capitalize my i's, and i'll start capitalizing my You's. I challenge You to do the same as an experiment. Then again, if you want to learn a language that is completely logical, there's always lojban. I'll leave you with this fun little poem:
Lets face it. English is a stupid language.

We sometimes take English for granted,
But if we examine its paradoxes we find that:
Quicksand takes you down slowly
Boxing rings are square
And a guinea pig is neither from Guinea nor is it a pig.

If writers write, how come fingers don't fing.
If the plural of tooth is teeth
Shouldn't the plural of phone booth be phone beeth
If the teacher taught,
Why didn't the preacher praught.

If a vegetarian eats vegetables
What the heck does a humanitarian eat!?
Why do people recite at a play
Yet play at a recital?
Park on driveways and
Drive on parkways
How can the weather be as hot as hell on one day
And as cold as hell on another

You have to marvel at the unique lunacy
Of a language where a house can burn up as
It burns down
And in which you fill in a form
By filling it out
And a bell is only heard once it goes!

English was invented by people, not computers
And it reflects the creativity of the human race
(Which of course isn't a race at all)

As of today, the seeds have been switched, and Empathy, the awesome Telepathy IM client withsupport for both audio and video chat, geolocation, Adium themes, and collaboration via Tubes, is now included in the Ubuntu 9.10 Karmic Koala daily LiveCDs. Let's get testing!