Blender's Open Movie Projects have already proved that it's possible to produce stunningly high-quality 3D animated films exclusively using free software in a studio setting. Now, a new animated short film called Tube, inspired by the ancient epic poem of Gilgamesh, is expanding on that work to bring free culture to the masses. The Tube project is not merely evidence of the technical capabilities of free software tools like Blender, PiTiVi, and Fedora GNU/Linux, but living proof of their viability for independent filmmakers. The most impressive aspect of the project is that it has managed to come together through distributed collaboration between 56 artists from 22 countries — some of which are at war. Tube truly highlights the incredible unifying power of free software tools and a free culture model. 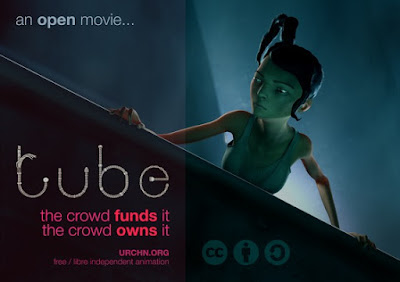 Within the first few days, Tube's Kickstarter campaign reached the minimal baseline goal of $22K and subsequently hit Slashdot. As the film enters the final stages of production, the Tube team needs as much support as they can get to make this story a huge success for free software, free culture, and independent animators everywhere. With the production funding target of $50K in sight and just a couple days left in the campaign, this is your last chance to support this ambitious undertaking and get your name in the film as a backer. There is enormous potential here; as Mashable questions, 'Will This Open-Source Animated Film Change the Movie Industry Forever?'
The film's public release is scheduled for 7 months from now along with all the assets, source, and project files under the free culture and copyleft Creative Commons Attribution-ShareAlike (CC-BY-SA) licence. For an in-depth discussion with the team, check out this interview with the Tube project founders on Libre Graphics World. It's up to us now to help Tube affirm the legitimacy of producing free cultural works in a fully free software workflow.