Is a new YouTube on the way? If so, what changes can we expect, and is there a need for a total overhaul? What motivation does Google have to completely redesign the popular video sharing site, and what evidence is there that this will really happen?

So what is wrong with YouTube? It's still the predominant video hosting and sharing website in the world, and competition hasn't stopped it from growing. Well, let's take MySpace for example: it still has plenty of users, but we know it's just a behemoth stuck in the past that will never be able to catch up with Facebook (though that's not to say Facebook can't soon be replaced). So why hasn't YouTube been overtaken in popularity, or even lost any significant ground to competitors? In a word, Google. YouTube has more resources at their disposal than anybody else and, on top of that, they have an enormous community that's instrumental to its success.

Just because YouTube is still on top, doesn't mean that everyone is happy or that the way things are currently being run is sustainable. Innovative competitors like The Video Bay have sprung up in response to users demanding the use of HTML 5  and/or raging over suspensions due to mass-flagging, ridiculous copyright enforcement, and unfair accusations of violating the community guidelines.

Many users, even many very popular ones, proclaim that YouTube is dying, but it's just in a very long transition period. Since Google acquired the company, i suspect YouTube has mainly been maintained and operated separate from the rest of Google as the site still looks more like it did pre-aquisition than it looks like a pure Google project. This is completely reasonable. For one thing, users hate change, even if it ends up growing on them after the fact (see Facebook and the new YouTube channel layout). Also, the site is so large and holds such a high volume of data that simply maintaining the site as it's been growing as fast as it has is surely a challenging project as it is: it isn't uncommon for YouTube to display a banner in light green about undergoing routine maintenance or even completely shutting down briefly on occasion with a similar message. "A lot" doesn't even begin to describe the amount of work cleaning out and rebuilding YouTube's infrastructure needed to make things "Googley", but that doesn't mean there isn't much being done behind the scenes.

Google is all about speed, efficiency, and usefulness. While it may be a huge undertaking, reconstructing the underlying framework behind YouTube has a huge long-term benefit to these core focuses. So, what might be coming?

New features like 1080p and 3D videos present a greater case for HTML 5 as higher resolution exacerbates the already unreasonably CPU intensive Adobe Flash player and 3D playback could much better be done using the many capabilities of HTML 5. Google is already supportive of the new HTML 5 open web video standard and has a demo in TestTube. Many, myself included, have been pushing for this to happen with the Free (not patent-encumbered) formats, Ogg Theora and Vorbis and have embarked upon endless debates that in the end are a complete waste of time. Google's currently pending acquisition of On2 Technologies, which incidentally created the VP3 codec which Theora is derived from, opens up the possibility of something much, much better. The new expectation is that Google will open up On2's codecs which are higher in quality than the H.264 standard, and use that with HTML5. Can you really imagine Google keeping them closed and making money off of royalties?

Orkut is the only major service offered by Google that is not just sub-par but downright shameful for them, showing no foresight or direction and holding no real promise-- until recently, that is. The new version of Orkut will pave the way for real improvements. While by no means is it a solid final product, especially by the standards to which we hold Google, it is a major improvement and the first shift toward a solid platform that they can really begin to expand on. Now YouTube has taken Orkut's place as the least Googley-looking service and putting aside the task of actually fixing it, getting users to warm up to change is damn near impossible. Google already has a way around this though, and you should be quite familiar with it. Their well-known tactic of making new services invite-only to make upscaling easier has the added benefit of dramatically altering users' perception of the service. Instead of approaching with fear and anxiety, the exclusivity of invitations produces an excitement and curiosity toward the product. This open mind is essential to get the vast majority of users to appreciate a new service-- otherwise, users who are currently ignorantly content would riot over any major change.

With a complete overhaul in order, a brand new look would be the most obvious thing you'd notice upon visiting the revamped site. While YouTube has cleaned up fairly well, it still hasn't reached a level of beauty expected of Google. Compared to other Google services, YouTube is ugly, cluttered, and disorganized. We should expect that YouTube's many features be balanced by a clean interface. The colors, while in line with the brand image, are not clean and basic; use of space is very very very inefficient; and things like "Featured videos" (not to be confused with promoted/sponsored videos) should not exist. Google's way of doing things is automated using algorithms, not by hand-picking content to showcase. 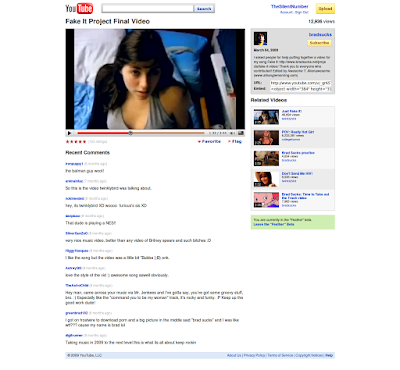 In a possibly related experiment, TestTube has a new "Feather" beta which aims to serve YouTube video watch pages with the lowest latency possible by severely limiting the features available to the viewer and using techniques to reduce the total amount of bytes downloaded by the browser. A new video player would be sleeker and do away with all of the loading problems that users frequently encounter: slow loading times, buffering getting stuck, not being able to seek to an exact point in a video, etc. A new look should also solve the problem of increasingly obtrusive advertising and find a satisfying balance to provide a much better user experience. Not too long ago there was a press conference scheduled and cancelled where YouTube was supposed to unveil its new look, but Google claims it was merely a miscommunication.

Channels and users should be entirely separate things, especially now that YouTube uses Google Accounts. One should be able to have multiple channels and channels should support multiple admins. I should not need a new account if i want to create another channel for a different focus. What if Blogger only allowed one blog per user? This can already be seen changing through YouTube Groups. Groups are actually channels and you cannot have a group with the same identifier as a channel because it is a channel. This is the beginning of channels having multiple uploaders and permissions management. Of course, this functionality is pretty shabby right now, but things are moving in the right direction.

Personal video storage has not been a focus of YouTube so far, but Google wants you to move your data to the cloud, so you can bet it will be. Cosmo, previously Google Web Drive (GDrive), originally codenamed "Platypus", as discovered in a leaked document, will become part of Google Docs. Icons have already been found for videos and Google Video closed off uploads long ago. Videos currently hosted on Google Video will likely be moved, and other Google hosted videos that use the Google Video player like Picasa Web Albums, for example, will likely be put in a new YouTube player. With changes like this happening, a complete re-branding including a change of name isn't completely out of the question.

Currently, TestTube has "streams", but that's just real-time sharing of YouTube videos which lets you chat with other users in the room. YouTubers are still forced to use other sites for live video broadcasts. YouTube has experimented with streaming events live starting in late 2008 so it's safe to assume they've been working on adding this capability for some time.

Most people that apply to for the YouTube Partner Program get an email which open up with this: "Thank you for your interest in the YouTube Partner Program. Our goal is to extend invitations to as many partners as we can. Unfortunately we are unable to accept your application at this time. The current level of viewership of your account has not met our threshold for acceptance." If YouTube really wanted to extend this program to as many partners as possible, why is there even a viewership threshold? Anybody eligible for an AdSense account should be able to make money off of ads displayed with their videos. It's mutually beneficial. YouTube must do away with its partner program as it exists today.

Google will work hard to get major content companies to put their videos on YouTube and make money off of them. Once this happens, there will be less reason to attack users for uploading copyrighted content since users are more likely to get it from the source anyways. Then, Google could also lift the painfully restrictive 10 minute length limit for videos which is said to have been put in place to hinder copyrighted uploads. In addition, it should be easy for users to specify their copyright and license videos with copyleft licenses such as Creative Commons Attribution-Share Alike (CC-BY-SA), Creative Commons Zero (CC0)-- which is a "stronger" Public Domain dedication that functions internationally--, GNU FDL, Artists License, Kopimi, etc. Picasa Web Albums already supports Creative Commons licensing.

It should be made much easier to download videos with permission of the uploader. With better codecs used for HTML 5 and Free Content licenses, it would just be silly not to make downloading videos easy. Just like The Internet Archive, users should be able to download the original file and anything YouTube transcodes it into.

I imagine that few, if any aspects of the site would be spared from replacement, at least not without significant reworking. Some small but significant changes might include, but are not limited to:

I'm sure you're itching find out how much of this will materialize or not, but there's really no telling how soon we'll see. A YouTube help article says that they will only allow logins using Google Account passwords, May 2009, but i can still sign in using my YouTube account and password. Perhaps this outdated article indicates that the new YouTube is behind schedule, and we could see it any day now, whenever it's ready.